long over due update

It’s been a while (again) since I've last posted here. I update a bit more frequently on the blog’s Facebook page. You can go here, press the like “button,” and get more updates if you’re a Facebook user. Even if you don’t visit Facebook often I would greatly appreciate it if you go to the blog’s page and press the “like” button. For some of you it might seem like a fake cheap aspect of life (this whole Facebook/social networking), but for me it’s gas to keep going and fighting this battle. Every single “like” is more gas in the tank.

As always feel free to share my blog and it’s Facebook page with anyone you want, absolutely everywhere you feel like. You can share the blog with family, friends, strangers, anyone. If you've read some of my posts in the past, it should be pretty clear that privacy isn't much of an issue for me. And trust me, if there something that I feel is too private, I will simply not write about it.

So I got back from Israel about a month ago. I had a wonderful little vacation. I enjoyed spending time with family and friends very much. It was a well needed break and reward after almost 6 months of chemotherapy. Unfortunately things haven’t been good since then. The pain has come back, and it’s worse than it ever was.

I saw my doctor as soon as I got back from Israel to talk about the plan, how we are going to continue my battle against cancer. The plan was and still is to be on this new medication called Pazopanib. This new medication was recently approved by the FDA. It is meant to keep fighting the cancerous cells. It is some type of chemotherapy just not as aggressive on the body.

I had a chest CT so that we will have a start point before I go on the medication. The CT showed the tumor is stable, but looking at the measurements it seemed to have grown about 2mm (0.08 inch). Not much at all, but the tumor is already very large (larger than a tennis ball), so any small growth can cause dramatic changes. And in my case this little growth appears to be right where some nerves are.

The pain started coming back already in Israel. I think in my last week there I started taking pain pills. It got worse when I got back, and it just kept getting worse. The pain has been worse than it ever was. I might have had a day or a few hours with as much pain as I have now in the past, but it wasn't so constant. The pain has been so bad that I’m now taking more pills than ever. The pain is located a bit under my left shoulder, and more on the back side. The tumor also affects the blood flow to my left arm, so I also have pain there. More than the strength of the pain, it is the fact that it's constant, all day, and I mean all day. It really wears on me. It is very annoying. It makes it hard to do anything. It makes it hard to focus, and it makes it hard to just relax. I currently have 3 different pain medications. Some I take on a regular basis, and some as needed (which is often).

The Pazopanib (the chemo pill) is another pill I take on a daily bases. One thing annoying about it is that I cannot take it with food. I need to take it one hour after a meal, and then I cannot eat for two hours. Of the many side effects this medication has, one of the main ones is that it causes high blood pressure, so I have to take another pill to reduce my blood pressure. I also have to check and keep track of my blood pressure every day.

I don’t know if it is the pain, all the medications, or my mood, probably all together, but another thing I've been suffering from lately is loss of appetite. If you know me, can you imagine that? Me, not having appetite?! Me, not wanting to eat?! I've never thought I’d say that. I've lost a lot of weight, but I mean a lot. I lost about 10kg (about 20 pounds) in less than a month. I cannot remember a time where I ate so little.

I also cannot drink alcohol with all the medications. I’m not going to take any chances, and maybe just have one drink. No, I’m not going to be drinking at all (not that I’m much of a drinker anyways). Driving is also a problem because all these pain pills can cause drowsiness. So now I’m dependable on others to drive me around. I sometime feel fine to drive, but I prefer not to risk it especially if I’m with someone who can drive instead of me. Sleeping is another issue. Since obviously you cannot take pills while you’re asleep, after a few hours of sleep, the pain pills wear off and the pain starts to come back, and that wakes me up in the middle of the night. Then, ok, I can take more pills because I'm up, but of course it can take more than 30 minutes until the medication kicks in. Also, all these pills are causing me nausea, so much that a few times I've puked the little food I was able to eat. 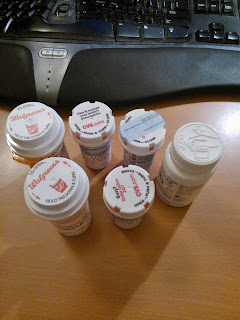 I feel as if I’m drowning in a pool of despair. I thought and had hopes that things will be much better when I get back from Israel. I felt great after I finished the 6 long chemotherapy rounds. The pain was completely gone, the chemo worked well, the tumor was stable, I was eating, and I weighted I think 71kg, a nice healthy number for someone my size especially after getting so much chemo drugs. I thought I will be on this new chemo pill, maybe have to deal with some minor side effects, but life would pretty much be back to normal (at least what’s normal for me).

I thought I would be free to do pretty much whatever. Maybe go back to school, maybe find a job. Go back to working out in the gym so I can get stronger and healthier. If not school, then at least just learn something on my own, by myself, taking my time. Maybe work on some application ideas I have for smartphones. Something… anything... Instead I feel like I’m losing it. The pain is really drawing all the energy out of me. It’s hard to relax and focus on things. It’s hard to get up and push yourself to do anything (that’s one reason why it took me so long to finally write here on this blog).

The main idea, after starting the Pazopanib, was actually to move back to Israel where I felt I would have a lot more support from family and friends. Where I have adorable niece and nephew that I could charge up, fill my energy tank simply by sniffing them. But with all this pain, I guess it will be wiser to first see that I can control it. And also see how the Pazopanib medication is working. I’m probably going to have a CT in a few weeks. If there is no change then I will probably have some more chemo rounds. Not as long and drastic as the first ones. Just a one day, a few hours in hospital chemo, but it will still weaken me in the following two weeks.

Not being able to get myself to do more with my days is a wonderful recipe for thoughts. And in my case it’s mostly negative and distractive thoughts. Thoughts that are hammering me left and right. I feel like I’m stuck in this circle where I’m trying to push myself, to get myself to do more, to distract myself from all the bad things, the pain, the thoughts, the anger. Yet I keep coming back to the same point over and over again.

It feels like many people, friends and family, are in denial. Once again, I hardly hear from anyone. Maybe they are in denial about my situation, about the fact I have cancer. Maybe I should just get out there, and make it clear: I do not know if I’ll see tomorrow. I know it’s not easy to read these lines, but it’s harder to deal with what they mean as the person with the cancer, especially when you feel abounded by so many people. Perhaps they think something like “ah, it will be fine, you’ll get out of it, we will laugh about this a year from now.” But no people, this is absolutely not certain that I will be here a year from now. This tumor I have is big. It is very big. This tumor is big and in a very complex area involved with many main important crucial arteries, some that are from the heart to the brain. Even if this tumor was not cancerous it would still be life threatening because of it’s location and what it has done to all the arteries in the area.

Before all this pain started, this pain that created this wave of negativity, I was able to get some joy. The San Francisco Giants won the World Series, after an unforgettable playoff run. For those who don’t follow sport, I’m talking about baseball. In the first series (which is pretty much the quarter finals) the Giants were down 2-0 in a best of 5 series. They won the next 3 games, and moved on to next stage. There, they were once again down and behind. This time they were down 3-1 in a best of 7 series. They won games 5, 6, and 7 for a ticket to the finals where they faced the Detroit Tigers. In the finals (another best of 7 series) it was a completely different story. The San Francisco Giants won the first 4 games, sweeping the Tigers, and winning the title. It was the second title in the last 3 years. No one gave the Giants a chance to win it all. And that’s probably because most of the commentators are from the east coast. I guess all those commentators were stuck in some bubble.