I've moved to a new apartment this week, so it took me longer than I wanted to finish this second part, but here it is. Ok, hmmm, where to begin?!

Fruits part 2. As I said in the part 1, I meant to talk about some of the fruits from back home that I miss. My memory isn't that good, I cannot remember a specific day where I went for a stroll, and picked some of my favorite fruits from some of the trees. Perhaps it is because there were countless such days. Maybe as I write things will come up to me, but this part 2 might be filled with facts about these fruits.

Let's begin with the fruit that I believe most of you will recognize, and that is the GUAVA. Now I bet most of you have heard about pink/red guava juice. When I say guava, I'm talking about the white guava fruit. Guava originated in Mexico, Central America, and the northern part of South America. Nowadays you can find it everywhere. It has a pear like shape. Like many fruits guava is green when immature, and turns yellow when ripe (why would they call it white guava then?!). I like to pick off the guavas just before they turn completely yellow. Once the guava is yellow you have about a day maybe two to eat it. After that the guava becomes too mushy, and probably already went bad. The size of the guava varies greatly between trees, and even on the same tree it could vary pretty good. Some trees can give fruits of 5 inches long (12.7 cm), but I think the average guava is more like 3 inches (7.6 cm).

Huh, I'm a little embarrassed to say I cannot remember the guava's unique taste, or maybe just don't know how to describe it. I remember that sometimes the taste would stay with me for a few hours. I also remember that I ate a lot of guavas. There was a nice sized white guava tree close to my house. It was at about 15 feet tall (4.6 meters). It also spread out nicely to the sides making a nice round shape. This tree was strong, healthy, and would give lots of fruits. This guava tree had lots of branches, and was very climbable. I remember climbing pretty high up there on this tree. Maybe 10 feet high. I believe I was about the age of 11-12 years old at the time.

Back home in the kibbutz, we have lots of trees with all types of fruits. I've been here in the US for almost 10 years now, and there are some fruits I really miss. Fruits that I cannot find here in the supermarkets though I haven't yet tried farmers markets. I think I've seen an actual guava fruit in supermarkets near me, but they looked different from what I know. What I haven't seen is, I present to you, the one and only, the PIIIIIIIITAAAAAAAANGAAAAA! Or just PITANGA. Pitanga is also know as Surinam Cherry.

I don't think I've ever seen Pitanga in supermarkets. I don't think anyone of my friends here have ever tried it, or even heard of it. I also don't recall seeing Pitanga in supermarkets back home. Maybe it isn't well known in Israel either? And I just know it because we had a few trees in the kibbutz? Pitanga is a small less than an inch long, and has a roundish shape. When fully ripe it has a purple color, but I like it more just before it turns purple, and has a red color. When the Pitanga is red, it has a sour taste with a hint of sweetness. When it is purplish it is the other way around, sweet and a bit sour.

There used to be a nice tree right outside the electrician shop back home (last I saw it didn't look too well). Pitanga isn't a big tree. I think it varies between a bush and a small tree. This one tree had lots of branches, and I think was about 8-9 feet tall (I'm guessing). It wasn't climbable like the Guava tree I was telling you about, but there was still a nice place on the tree to put your foot in to get up about 2-3 feet. I ate many Pitangas at that tree. I would also scan the tree to see which ones will be ripe in a day or two. The Pitanga, by the way, originated in South America. I would love to have some PITANGA in my hand right now.

Next up is the FEIJOA. Feijoa is also known as Pineapple Guava or Acca Sellowiana and Guavasteen. Now Feijoa I remember being able to find in supermarkets, I'm pretty sure of it. I remember going to my grampa, and we would have lots of them. His neighbor had lots of small trees it looked more like a long line of bushes of Feijoa. Like someone trimmed them into hedges. Feijoa has a sweet taste, and I liked it that way. However, once again, I wouldn't mind the ones that were picked a little early. The ones that were a little hard, and were a bit sour. The texture is juicy, and jellylike. Feijoa is fun to eat. You scope out the flesh with a tea spoon. And if you don't have a spoon then try biting into it, and some how splitting it in half. If you were able to do so then you'll probably figure out how to eat the flesh. Feijoa has an egg like shape. The size of a Feijoa could get as big as a tennis ball, at least from what I've seen back in the kibbutz. Feijoa will stay green even when ripe, and ready to enjoy. And would you believe? FEIJOA is also native to South America, it is also very much known in New Zealand. Maybe I should move to South America...

The next fruit is the BLACK MULBERRY. Black Mulberry looks like black berry, but it is a bit longer (about 1/4 inch), and not as wide. The only tree I remember of Black Mulberry from back home was at one of my ima's best friends' house. It is hard to tell from here, and I wasn't there for a long time, but I think that tree is about 15 feet high (they go up to 30 feet which is about 9 meters). It has a nice round shape enough to park a car under it which gives a nice shade. I can't remember if I liked the black mulberry when fully ripe or just before. I think I used to like it just before, and then one day I started liking it more when fully ripe, when it's color... yup was black or maybe dark purple. I have a vague memory of eating white mulberry, but I'm not sure where. And indeed there are a few species of mulberry. Hey! This fruits is not native to South America. The BLACK MULBERRY is native to East China. 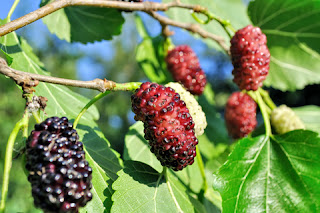 Let's finish this post already. The last fruit is the LOQUAT. It's another fruit originated in China. This one in Southeastern. I actually see a lot of Loquat trees where I live, but I don't think people know you can eat it. I love loquat, and I was lucky on my last visit to Israel to be there in season. I have a tree back home that I planted about 15 years ago. I ate some loquat off my neighbors' tree, and I took the seeds from the ones that tasted good. Then I planted them in my ima's garden. I'm not sure if it made much of a difference, but the fruits this tree gives are very good. This tree is very tall I think about 15 feet (yeah I guess they all look the same height to me), and it is a shame because you cannot get to so many of its' fruits. I get about half way up with a ladder. On this last trip I probably ate over 100 loquat. The taste of the loquat is sweet. It is green when unripe, and turns orange when ripe. I sometimes will pick off the loquat when yellow. It is a bit sour then, but I prefer it when fully ripe. When it is fully ripe it has an orange color, and tastes sweet. The size can get up to about 2 inches long and about an inch inch and half wide. Here are some pictures of the LOQUAT. 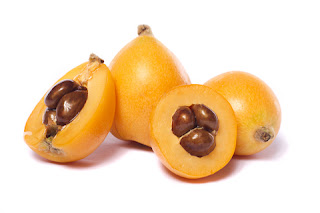 So that's about it from the fruits I grew up on. A short reminder, if you are in the San Jose next weekend my NF family and I would love to see you at the 2nd annual San Jose NF walk. You can register here. If you cannot make it, it is ok, maybe you can help me with my fundraiser. The money will go towards research to find a cure for NF. Click here to go to my fundraiser page. THANK YOU!!
Posted by Ilan at 11:21 PM